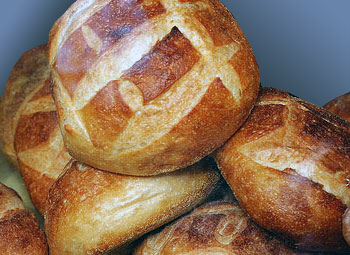 Rising to the Occasion
Michael Pickering

My wife Judy baked bread recently for our annual St. Patrick’s Day luncheon at Pickering Labs.  She’s an excellent baker, and her Irish Soda Bread is a favorite addition to the corned beef and cabbage “traditional” fare.  Soda bread uses baking soda instead of yeast as the rising agent for the dough.  In addition to baking soda, her recipe also calls for flour, salt, and buttermilk.  This is typical for soda bread, as the buttermilk contains the lactic acid required for the ‘rising’ reaction with the sodium bicarbonate.

Having grown up in Southern California, I have fond childhood memories of another special kind of bread – Salt-Rising Bread.  This denser bread relies on the fermentation of salt-tolerant bacteria in cornmeal.  The cornmeal must be freshly stone ground, and the dry ingredients also include sugar and salt.  The starter is formed as scalded milk is poured over the dry ingredients, and then left to incubate for about twelve hours at 100 or so degrees.  Despite its name, salt is a relatively minor ingredient in the bread.

The Van de Kamp’s bakery had a rich history which straddled my own childhood and years living in the greater Los Angeles area.  Although the bakery was originally sold by the Van de Kamp family back in the 1950’s when Theodore Van de Kamp died, the Dutch windmill style bakeries and fresh salt-rising bread remained a warm memory for many of us Southern California children.  When accompanying my mom to buy our bread, I was treated on more than one occasion to a free windmill toy and a cookie.

By the mid-1970’s, the Van de Kamp bakeries had stopped baking the salt-rising bread I grew up on, but by that point I had left Southern California and moved up to the Bay Area, a region where the Van de Kamp bread had been seldom offered and shortly went out of business.  However, in San Francisco, sourdough bread reigned supreme and had since the California Gold Rush.

Sourdough bread also uses natural microbes as a rising agent, but the longer fermentation of the starter allows the Lactic Acid produced by the Lactobacillus to give the bread a uniquely sour taste.  Naturally occurring yeasts such as Saccharomyces exigua and Saccharomyces cerevisiae also participate in the rising.  Sourdough yeasts work slower than today’s packaged yeasts, increasing the time needed for fermentation to multiple days.  San Francisco sourdoughs are usually kept closer to 70 degrees and often need a week to become stabilized.

Flour and water are combined in the starter, and various methods for introducing micro-organisms and stabilizing the dough are used.  Often times, boiled potatoes are used to help increase the activity of the bacteria.  Creating a sourdough starter is a baker’s science, and each recipe is unique and starter closely monitored.  As a result, bakers are often using “mother dough” that is many years old.  Some bakeries, such as the Boudin Bakery, are able to trace their “mother dough” back to the Gold Rush era.

During the 1980’s, as modern food processes and general business consolidation trended, San Francisco bakeries fell into the hardship of competition with prepackaged bread.  Smaller bakeries were driven out of business, and the long-term survivors tended to be the larger bakeries with well-established distribution channels.  I moved to Oregon during this time, and my observations upon returning to the Bay Area some years later made it clear that there was a stark change in the availability of good local sourdough bread.  Fortunately for my family, Judy was at the peak of her baking heyday during this time and we were seldom lacking in good bread around my house!

Fast forward to now, and the artisan bread movement has brought back the ability to purchase good, hand-made loaves of bread.  Specialty bakeries have been started and thrive in high numbers.  Even restaurants and grocery stores are taking the time to bake their own bread.  I personally continue to feel that no sourdough of modern San Francisco origin can compete to the distinct sour taste and texture of earlier days, but there is no Pickering starter dough dating back to 1970 lurking in my refrigerator, so I make do with what’s available.  It is my sincere hope that the continued evolution of artisan bread, gastronomy, and the souring culture will ultimately recreate my ideal sourdough again soon.

Until then, at least we can look forward to St. Patrick’s Day each year, when Judy will rise to the occasion and bake a unique bread to treat us all again! 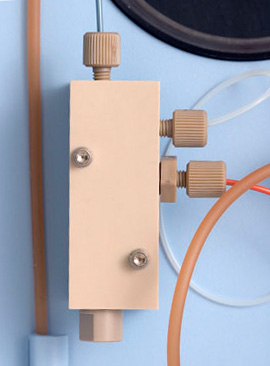 Cleaning and Reassembly of the Over-pressure Relief Valve

We will have our Pinnacle PCX post-column derivatization instrument on display as well as our Mycotoxin Analysis Products. In addition, we will some new videos to highlight the latest in our Automated Sample Preparation instrument the FREESTYLE SPE system.

Wendy, David and Mike will be in Chicago. Please stop by. We would love to talk with you!

The peptide and protein based pharmaceuticals are a rapidly expanding class of therapeutical agents that are used to treat a wide variety of health conditions, including cancer, metabolic and auto-immune diseases, HIV and more. Biologic drugs, such as monoclonal antibodies, are derived from living organisms and are usually very expensive. As many biologics are coming off of patents, the market is ready for cost-saving biogenerics. But all proteins, including monoclonal antibodies, have complex structures that determine their function. Differences in structure would alter biological activity leading to changes in safety and efficacy of the drug.

ICH Q6B is a guidance document that provides a set of internationally accepted specifications for biotechnological and biological products to support new marketing applications. It establishes the set of criteria to which a drug substance, drug product or material should conform to be considered acceptable for intended use.

The Amino Acids Analysis with post-column derivatization is a very sensitive, reproducible and rugged method and it has been a preferred approach for laboratories running biological samples, protein, peptides and foods analysis. Pickering Laboratories Inc. offers many Amino Acids Analysis products including post-column derivatization instruments, columns, eluants, reagents and standards. All products are designed to work together to deliver optimum results for any chosen sample.

You can download this abstract, as well as our product catalog and other notes from our website: www.pickeringlabs.com

A method for the calculation of whey protein fraction in milk-based formula products was developed and validated by a group of researchers from Abbott Nutrition, Covance Laboratories and AOAC International. The method is based on calculating the ratio of (Asx + Ala)/(Pro+Phe) determined from the amino acid profile of the hydrolyzed sample.

The method was approved as AOAC Official First Action Method 2012.07 and is appropriate for accessing compliance with whey content requirements of GB 10765-2010 (National Food Safety Standard Infant Formula)*. It is applicable to finished products containing both intact and partially hydrolyzed whey proteins.

The method performance was evaluated using non-fat dry milk and products with whey levels from 32% to 63%, including NIST Infant Formula Standard Reference Material. The repeatability ranged between 0.3 and 2.5 %, while intermediate precision were between 2.6 and 3.4%. Average recoveries ranged from 97 to 100%.

The unmatched accuracy and precision of amino acid analysis by HPLC with post-column derivatization allowed the researches to develop a robust mathematical model for calculating whey protein fraction that can be successfully applied to a wide range of products. This proved once again that post-column derivatization analysis of amino acids is still a method of choice for laboratories that require highly accurate results.

The reference to the published study is below. The First Action Official Method 2012.07 can also be found online at http://www.eoma.aoac.org/.

(*) this is a Chinese Standard

Cell cultures are widely used to produce biopharmaceuticals and other biologically active compounds. The composition of the cell culture media affects the yield and structure of the desired products and must be carefully optimized. Cell culture media is typically composed of mixtures of amino acids, vitamins, carbohydrates, inorganic salts as well as different peptides, proteins and other compounds. As the cells grow, they consume nutrients and release target biopharmaceuticals as well as waste products.

Amino Acids serve as the building blocks of proteins, as well as intermediates in many metabolic pathways. Amino Acids are typically added to cell culture media to provide nutritional requirements for the cells. Monitoring and adjusting Amino Acid composition is an essential part of optimizing the manufacturing process to ensure high quality and optimum yield of the final product.

Amino Acid Analysis using cation-exchange chromatography with post-column Ninhydrin derivatization allows for easy determination of Amino Acid concentrations in many complex matrices, including cell culture media. The post-column method is very sensitive, reproducible and rugged. It has been and continues to be a method of choice for laboratories running biological samples, protein, peptides and foods analysis. Most chemical compounds present in the media do not interfere with analysis, so the majority of samples only need diluting with citric buffer and filtering before analysis. If serum is added to the media, then the proteins need to be precipitated using either Seraprep™ solution or ultrafiltration.

Polyether Antibiotics are commonly used for preventing coccidiosis and other infections in poultry and for improving feed efficiency for beef cattle and swine. The use of Polyether Antibiotics is strictly regulated, with only specific ionophores approved for use in feeds intended for different animals.

Analysis of Polyether Antibiotics by HPLC with post-column derivatization and UV/Vis detection has been proven to successfully identify and quantify Monensin, Narasin and Salinomycin in medicated feeds, supplements and premixes as well as to determine trace contamination levels in non-medicated feeds [1, 2].

Post-column derivatization of Polyether Antibiotics is done using highly acidic Vanillin or DMAB reagents. The Pinnacle PCX derivatization system (Pickering Laboratories, Inc.) has an inert flow path and automated system wash capabilities that make it uniquely suitable for handling corrosive reagents. The two-pump system is recommended to extend reagent stability, but the single-pump system for this application is also available.

Adding a Fluorescence detector to the instrumentation allows for using the same extraction procedure and HPLC conditions to also determine Lasalocid, which doesn’t require post-column derivatization.

METHOD
Sample Preparation
To 25 g of finely ground feed sample, add 100 mL of extraction solution (90% Methanol – 10% water). Shake for 1 hour at high speed using a mechanical shaker. Let the solids settle and filter an aliquot of the extract for injection. Dilute with extraction solution if needed to fit the calibration curve. Use a 2.5 g portion when testing premixes.

Conclusion
Analysis of Polyether Antibiotics by HPLC with Post-column derivatization is a robust and sensitive method that utilizes standard equipment and could easily be adopted by testing laboratories. It allows for testing of different ionophores at wide range of concentrations,
including at trace levels. Using Pinnacle PCX post-column derivatization system, factory configured for the analysis, guarantees stable and reproducible results.

The full application note as well as our complete Product Catalog can be downloaded from our website: www.pickeringlabs.com