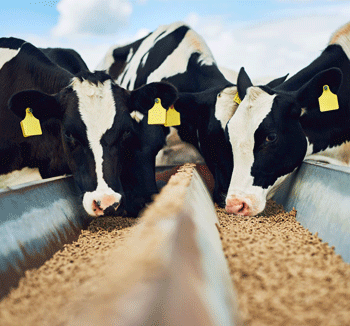 Polyether antibiotics, such as Monensin, Salinomycin, and Narasin, also referred to as ionophores, are widely used to control coccidiosis in poultry and to promote growth and increase feed efficiency in cattle. Ionophores reduce the number of gram-positive bacteria that favor fiber fermentation in the rumen thus increasing the number of gram-negative bacteria that favor starch fermentation.  That changes the profile of bacteria-synthesized volatile fatty acids, improving energy intake from feed. Since ionophores have a narrow safety range and are toxic in case of overdose or if fed to sensitive species, medicated feeds, premixes, and supplements are strictly regulated.

Analysis of polyether antibiotics using post-column derivatization with Vanillin in an acidic environment is the basis of several AOAC official methods for feed analysis. Advantages of using this approach include wide analytical range, easy sample preparation, and superior accuracy and reproducibility of analysis.  Post-column derivatization is especially useful for analysis of fairly high concentrations in feeds and premixes since the methods wide analytical range and absence of matrix interferences allow to avoid excessive sample dilution therefore improving accuracy of the results.

Several years ago, researchers from UC Davis presented a study at American Association of Veterinary Laboratory Diagnosticians (AAVLD) annual meeting comparing the use of LC/MS methods and post-column derivatization methods for analysis of polyether antibiotics in feeds and biological samples. The group has demonstrated that while LC/MS methods were sensitive and performed well for trace analysis, they presented a lot of challenges when applied to feed samples. Poor chromatography, matrix interferences, poor linearity of the response, and narrow analytical range led to up to 30 % RSDs and considerable deviation from expected values for feeds and pre-mixes. Contrarily, all these problems disappeared when the feeds were analyzed using post-column derivatization with Vanillin. Validation results showed low variability of the results with less than 4 % RSDs for spike recoveries and feeds analysis, wide calibration range from 10-2000 ug/mL (vs 0.1 – 1 ug/mL for LC/MS) and good correlations with expected values.

Pickering Laboratories’ Onyx PCX post-column derivatization system is uniquely suited for highly acidic reagents due to the fully inert flow path and automatic pump flush capabilities. In addition to the post-column derivatization system, we offer highly purified Vanillin and an analytical column tested to ensure separation of Monensin A and B as well as Salinomycin, and Narasin.  Pickering’s method can easily be implemented in any feed laboratory and used to run analysis of medicated feeds and supplements according to official AOAC methods. The same post-column system and HPLC instrument can be utilized for analysis of amino acids in feeds.

We use cookies on our website to give you the most relevant experience by remembering your preferences and repeat visits. By clicking “Accept”, you consent to the use of ALL the cookies.
Do not sell my personal information.Please note that you can always revisit and manage your cookie consent by clicking on a link found on our Privacy Policy page.
Cookie Settings Accept
Manage consent

This website uses cookies to improve your experience while you navigate through the website. Out of these, the cookies that are categorized as necessary are stored on your browser as they are essential for the working of basic functionalities of the website. We also use third-party cookies that help us analyze and understand how you use this website. These cookies will be stored in your browser only with your consent. You also have the option to opt-out of these cookies. But opting out of some of these cookies may affect your browsing experience.
Necessary Always Enabled
Necessary cookies are absolutely essential for the website to function properly. These cookies ensure basic functionalities and security features of the website, anonymously.
Functional
Functional cookies help to perform certain functionalities like sharing the content of the website on social media platforms, collect feedbacks, and other third-party features.
Performance
Performance cookies are used to understand and analyze the key performance indexes of the website which helps in delivering a better user experience for the visitors.
Analytics
Analytical cookies are used to understand how visitors interact with the website. These cookies help provide information on metrics the number of visitors, bounce rate, traffic source, etc.
Advertisement
Advertisement cookies are used to provide visitors with relevant ads and marketing campaigns. These cookies track visitors across websites and collect information to provide customized ads.
Others
Other uncategorized cookies are those that are being analyzed and have not been classified into a category as yet.
Save & Accept
Powered by