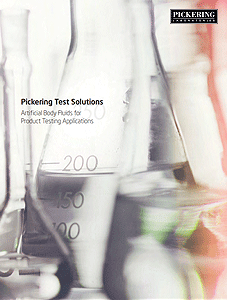 In case you’ve missed our recent activity, here is a summary of the new products we made available this year. Look for more exciting product testing solutions and post-column applications in the New Year!

1700-0542 Sweat DIN EN – IEC 60068-2-70. Not Stabilized
1700-0543 Sweat DIN EN – IEC 60068-2-70. Stabilized
Abrasion of markings and letterings caused by rubbing of fingers and hands. This formulation is intended to provide a standard method to determine the resistance of markings and letterings on flat or curved surfaces against abrasion as it may occur by manually operating actuators and keyboards. The method is also suitable to test the resistance against fluid contamination as it may occur under normal use.

1700-0556 Artificial Apocrine Sweat non-stabilized 250mL.
Apocrine sweat is secreted by apocrine glands located in the areas of the body with an abundance of hair follicles such as the scalp, armpits and groins. Apocrine sweat is initially sterile and odorless but when acted upon by bacteria it forms odorous compounds. Artificial Apocrine Perspiration was developed to mimic the composition of human apocrine sweat and contains several volatile fatty acids that are responsible for the unpleasant odor associated with it. The ready-to-use solution is stored frozen and could be used for testing that requires the presence of malodor. It also could be used to culture bacteria that are commonly present on human skin.

1700-0557 ISO 3160, 19.8L, Stabilized
This formulation is used to determine corrosion (tarnishing, oxidation and surface penetration) resistance for gold alloy coverings on watch cases and accessories, including bracelets when they are permanently attached to the case. The solution is at pH 4.7 per ISO 3160 specifications.

1700-0800 Simulated Lung Fluid, Gamble’s, Not Stabilized, 200mL.
Gamble’s solution represents the interstitial fluid deep within the lung and is used to simulate different lung conditions. It is used in pulmonary drug delivery studies as well as in studies of particles inhalation effects. Citrate is used in Gamble’s solution instead of proteins to avoid foaming and acetate instead of organic acids. Gamble’s solution has a pH of 7.4. Inquire about other simulated lung fluid formulations.

1700-0801 Substitute Ocean Water, ASTM D1141-98
Substitute ocean water is prepared according to official ASTM method D1141-98. This product could be successfully used in a wide variety of tests where solution simulating sea water is required, such as oil contamination testing, detergent evaluation and corrosion testing. The pH of the solution is 8.2.

With the increasingly lengthy disruptions to daily life caused by COVID-19, Pickering Laboratories, Inc. wants to continue reassuring our customers that we remain open for business this summer.  We continue to maximize support for our customers and provide essential businesses with the reagents and supplies necessary to operate, including hospitals, clinical laboratories, food safety and environmental testing facilities.

Our inventory levels and response times remain normal.  Responsiveness is subject to change and new orders still may need to be prioritized accordingly to supply essential businesses.

Thank you for your patience and for your business as we continue to work together through this difficult time.  Please contact us with any questions you may have.